The work of Ray Harryhausen, who sadly passed away last week, has influenced generations of filmmakers.

He’s influenced everyone from Steven Spielberg, Peter Jackson and James Cameron (who even did some early model work on Escape from New York) and special effects gurus such as the late Stan Winston and Dennis Muren.

Famously, when presenting Harryhausen with a special Academy Award in 1992, Tom Hanks told Harryhausen “Lots of people say Casablanca or Citizen Kane is the greatest film of all time… no way, it’s Jason and the Argonauts!” 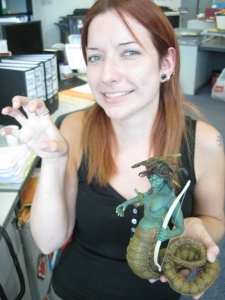 He’s also had quite an effect on the next generation of talent, including up and coming animator, Rachel Barrass, 27, from Southend-on-Sea, Essex.

Rachel, whose picked and mixed her favourite dynamation creations to create the ultimate Harryhausen monster, said: “Watching Ray Harryhausen’s films at Christmas was almost a religion for me through growing up, and is something I continue to revel in.”

As a child Rachel was fascinated by the creatures and, like many of us, believed them to be real. Now older, and after having studied a degree in BA (Hons) Animation at South Essex College, Essex, she is enthralled by the movies Harryhausen had a hand in but now also appreciates his work from a technical point of view.

Rachel added: “The sheer detail that goes into his puppets, from the armatures to the skin is just so unique and once complete bring his creations vividly to life. His detailed imagination and skills flow through inanimate objects bringing them so vividly and memorably to life.”

For Rachel stop-motion animation is her medium of choice. She continued: “It’s a very personal thing, you create your subject and then you are in close contact with it for a long period of time, it is essentially your actor and you are controlling each and every movement and nuance, bringing your performance to it and for me that is the magic of Harryhausen. It’s almost as if you are god (or perhaps Zeus in Harryhausen’s last hurrah, Clash of the Titans) as you watch the movements made.”

Rachel goes all Victor Frankenstein and creates the ultimate Harryhausen creation, a greatest bits if you will. 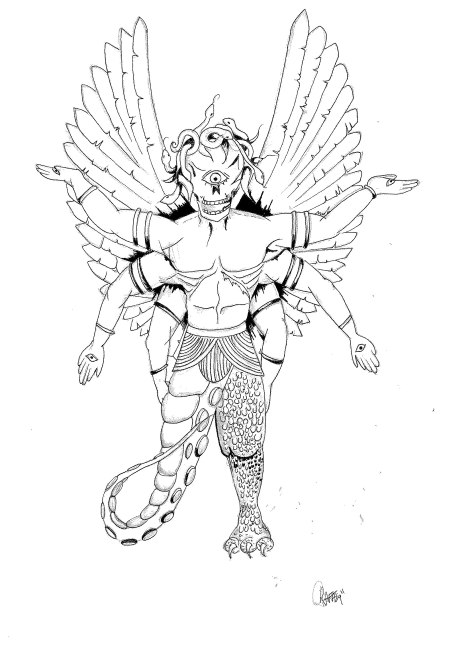 ‘Hair’ of Medusa – Clash of the Titans

Rachel says: “My all-time favourite character, her eyes are just fantastic, and who wouldn’t want to be able to turn the odd person into stone. Perhaps Harryhausen’s finest hour for a single character and her final showdown is an epic, fitting end to his big screen career.”

Head of skeleton – Jason and the Argonauts

For those who don’t know Ray Harryhausen by name, then they will probably know him as ‘the fighting skeleton guy’, a scene that has been riffed in everything from The Mummy to Army of Darkness. Rachel says: “One of the most memorable fight scenes ever and certainly perhaps the most oft-shown and quoted this side of Kong as a standout in stop-motion.”

Rachel says: “The eye has it. The Cyclops feature in several Harryhausen epics and they made great noises.”

Torso of Talos – Jason and the Argonauts

Rachel says: “One of the ‘largest’ of his characters this was the original ‘iron man’. The noises he made as he walked still make me shudder. Great interaction with real actors as well that really made you believe he was that big.”

Arms of statue of Kali – The Golden Voyage of Sinbad

Tentacle of sea monster – It Came From Beneath the Sea

Rachel says: “People forget Harryhausen wasn’t just a master of the ancient monsters, he also did a good line in sea creatures as well, even though the budget and time constraints did only allow his creature to have six tentacles. When I talk to anyone about old film they always mention this one.”

Leg of dinosaur – Beast from 20,000 Fathoms/ One Million Years BC

Rachel says: “Reptilian beasts made several notable appearances under Harryhausen and he just went to show that he could turn his hand to any monster, mythical or not and still make them fresh, exciting and full of character. Of course it did help that they were often far more animated than some of the actors they appeared alongside.”

Wings of Pegasus – Clash of the Titans

Rachel says: “Most girls I knew wanted a My Little Pony when growing up, I wanted Pegasus. Who wouldn’t want a flying horse? One of the few heroic Harryhausen creations and everyone loves a hero…apart from perhaps that clockwork owl!”

And there we have it, perhaps not the prettiest looking creature around but certainly one of the most formidable. What parts from Harryhausen’s back catalogue would you have chosen? Thigh of Mighty Joe Young anyone?