That dream became a nightmare best depicted in The Amityville Horror (1979).

I’ll always have a soft spot for the film as it was the first horror film that I ever bought on VHS (Woolies, Mansfield, 1987 if you are interested), a striking cover from The Video Collection showing Margot Kidder facing down a ruddy great axe. A publicity shot as that scene isn’t shown from that angle in the film.

The film, based on the best-selling novel by Jay Anson, was a massive success upon its release, very much taking its horror cues from both The Omen and The Exorcist, and like the latter had the much-loved horror staple of being based on a true story.

The truth and the half-truths have long been conjecture but it is certainly undeniable that the murders at Amityville and the subsequent stay by the Lutz’s has become the stuff of horror lore, from possession to houses being built on Indian burial grounds and blood running down walls.

And that is still what makes it a massively accessible story, its a classic haunted house movie, hokey in places but that is part of the fun of it.

Oft-imitated? Sure, and you’ve only got to look to the return to haunted house films of late, from Sinister to When The Lights Went Out and The Conjuring to see their enduring appeal.

All of which are old school in their scares, like Amityville, the latter The Conjuring – also based on true events – even features two paranormal psychics who at the close of the film are heading to their next case, none other than at the house in Amityville. The house, with those unmistakable evil eyes actually features in the opening of The Conjuring 2.

And talking of the house, that’s where we start with the opening titles over a silhouette of the building featuring a haunting Lalo Schifrin score – allegedly a rejected The Exorcist score but isn’t, however it was used to great effect on the trailer for Pet Sematary and suitably sets the tone.

The film and book would have us believe that the house is evil, it is certainly the star of the film (if not the original house or location)  and its evil eye windows can be seen staring at us throughout the titles and the poster – interestingly enough the windows of the original house were changed to normal rectangular ones to stop people finding it.

Cut to a dark and stormy night, what else. So far, so typical house of horror, but amid the lightning outside we see lightning inside, created by gunfire in each of the rooms. Although the family, clearly including children, aren’t named they are the very real DeFeo family, by eldest son, Ronald DeFeo, shot in their beds as they slept on November 13th 1974.

The Lutz’s (played by James Brolin and Margot Kidder) and their children look round the house a year later, shown round by the estate agent who just so happens to be the save the clocktower woman from Back To The Future, funnily enough Strickland from BTTF also plays a coroner in the previous scene.

As the couple are shown round the house it overlaps with scenes of the murders taking place in those rooms, which is really effective. They buy the house for $80,000 and so the film unfolds, slowly burning and building to its climax of exploding windows and walls and stairs that drip blood.

It certainly slowly turns the screws in the minds of the characters and the audience and builds pressure cooker-style, exploding like the front door off the house. And whilst everything doesn’t work or make sense it has more than enough images and moments to linger and stay lingering to this day.

You believe Kidder and Brolin as a couple and slowly follow their decent. Rod Steiger also has a memorable turn as Father Delaney, he perhaps has one of the most memorable scenes in the film blessing a room in the house only to interrupted by flies in winter (the films answer to The Omen’s er Doberman) and a hissing malevolent voice telling him to ‘get out!’

Even if it almost seems as if his character belongs more in The Omen at times. Added to that we have upside crucifixes, invisible friend Jodie, glowing pig eyes, a self-rocking chair, dubious cellars and the ‘we forgot the dog’ moment. There is also a nice appearance from Murray Hamilton, probably best known as Amity’s Mayor Vaughn in Jaws.

The debate over whether it is a hoax or true horror rumbles on, but the truth is that this is still a memorable and creepy film. 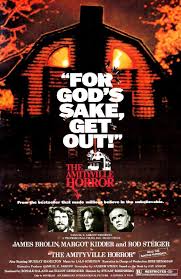 Classic? For me it is, although that may be more to do with when I first saw it. Even if you have never seen The Amityville Horror you will have certainly seen a horror film that has taken influence from it. If you have never seen it, or not seen it in years make sure you make the rightmove and give it a viewing.

Just make sure it’s the original and not the insipid 2005 remake.

A prequel to the 1979 original followed in 1982, entitled Amityville  II: The Possession – based around an essentially fictional version of the DeFeo family, and a a further sequel in eye-popping 3D, Amityville 3D in 1983. Perhaps now most of note for being the screen debut of Meg Ryan.

Several direct to video offerings have continued the Amityville franchise (in pretty much name only) which has concentrated on everything from a haunted lamp from the house and a model of the house. I’ve still a fondness for The Possession and 3D, from when I first saw them.

The related film that is also worth a visit is My Amityville Horror, a documentary revolving around one of the now adult Lutz children. It adds a further dimension to the book an film, just don’t expect it to answer many questions. It’s a nice and unique addition to the continuing story – true or otherwise.