A young family finds they have paranormal activity within their home, it’s a poltergeist (meaning noisy spirit in German).What starts off as something playful soon descends into terror as the children are attacked in their rooms. The daughter, Carol Anne, is taken by the spirits and makes contact via the television – in the film’s most iconic moment – can she be saved and can the family stop themselves being dragged to the afterlife?

What sets Poltergeist apart from most haunted house movies is that it is set in a nice house, in a nice neighbourhood and everything looks normal. There is no Scooby-Doo haunted mansion vibe, no evil eyes like the Amityville house. It could be our house or yours, and that is its power.

We are the Freeling family and that is what Spielberg does best, take an ordinary person or family and put them in an extraordinary situation. Just look at Chief Brody from Jaws, Roy Neary from Close Encounters or David Mann from Duel.

To many Poltergeist was Spielberg’s darkness to E.T.’s light, they both came out in the same month in the US in 1982. He served as writer on this and Executive Producer, although it has oft been mooted he had a closer hand in direction as well, rather than Texas Chainsaw-helmer Tobe Hooper. But that is a whole other blog entry.

All horror films should of course be watched with the lights off but Poltergeist loves the darkness, especially when the strobing effects kick-in. Fittingly, it really drags you into the television. 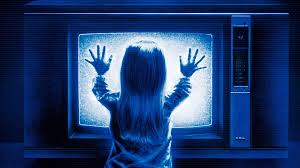 The good thing is that since the advent of 24 hour television, whether that be rolling news or rolling balls around a roulette wheel, you will never again wake up with a Poltergeist television. There’ll never be that snow dancing shadows madly across your walls.

So the original Poltergeist seems more nostalgic and further away than ever. The film starts on that typical Spielberg world of safety and harmony, the suburbs, and actually the first half has plenty of sunny and light moments. Even the Poltergeist activity is initially treated as a joke and something to have fun with, the moving kitchen chairs for instance. Carol Anne states it is the TV people; I certainly never had that problem with Radio Rentals!

There are signposts aplenty though, even the remote control cars that cause the man hulking beer to come off his bike in the opening scene are a precursor of things to come with toys coming to life and causing chaos. The dead budgie, Tweetie, even in its coffin cigar box it warns us of the shape of things to come when it is unearthed by a digger for the swimming pool.

There are even clues on the television, in an early scene the old Spencer Tracey film A Guy Named Joe plays on TV, there are already ghosts in the machine as it’s about a man who dies and comes back as a ghost. It was of remade by Spielberg seven years later as Always.

Robbie and Carol Anne’s room is cool, full of Star Wars posters and toys, although I’m not sure about the Alien poster. The film really taps into those childhood terrors of open closets, things under the bed, thunderstorms, clowns and ominous trees tapping on your window. Ten fold, it could also be seen as an extension of a similar scene in Close Encounters when Barry’s toys come to life as aliens – and again some glorious light, a Spielberg staple – envelop the room and also bring toys to life.

A bit like the spirits at the end of Raiders of the Lost Ark, at first they beautiful, the spirit from the television that dances round the room before leaving its ectoplasm all over the bedroom wall is as haunting as it is enchanting.

This is echoed in the sublime score by Jerry Goldsmith, beautiful but creepy, magically dark, especially the haunting dips in sound.

But then the spirits turn with fearful effect. That ruddy tree outside the bedroom window though, the impending thunderstorm marching closer not further away, it still gives palpitations. Then, the tree grabs the son, it’s startling and surreal, but it’s just misdirection so that Carol Anne can be sucked into the closet and to the other side. From here on in as ludicrous as things get, by and large you go with it simply because you are wrapped up in the emotion.

Crucially, it’s the performance from the mum and dad that really ground it and their efforts to do anything to get their daughter back, it’s the little things like her mum, JoBeth Williams, thrilled to be smelling her daughter after a blast of air travels through her and Craig T. Nelson (Patrick Wilson being a great substitute in the very Poltergeist-like Insidious) forced to get angry with Carol Anne to tell her to do as she is told or he’ll be forced to spank her. Amid all this supernatural fantasy is real, heart-wrenching drama

about a family with a ‘kidnapped daughter’, it just happens to be by a ghost. They are the emotional core of the film.

And when they finally get Carol Anne back it is less smoke and mirrors and more wind machines and fantastic lights displaced by fish tanks. It’s dizzying, effective and so simple. This rescue is headed up by movie-stealing Zelda Rubinstein, who played Tangina, the spirit guide who pronounces the house is clean; she isn’t in the film half as much as you think she is. It is only for about ten minutes duration, but she leaves a lasting impression on both the family and the audience.

After that rescue the Freelings prepare to move out, of course, it turning out that the whole estate had been built on a graveyard, the headstones had been moved but not the bodies and Carol Anne – a beautiful and natural performance by Heather O’Rourke – was the focus of the spirits as she had been born in the house.

After all that went before, they and we think it is all over, and as they pack and play in their rooms they discover it is not. A great ending to the film, complete with mum being dragged up her bedroom wall and ceiling Fred Astaire style and some unwelcome guests in the unfinished pool, but I don’t buy the family not just leaving, and even if I did I certainly wouldn’t be letting my kids play in the room where one of them went missing and another was attacked by a tree. It was the clown that got him this time.

As the dead explode from the ground in their caskets, to great effect, the Freelings do escape; thankfully complete with dog, E Buzz, by the way is a great dog actor as well with some brilliant expressions. Checking into a motel, this time they aren’t taking any chances and leave the TV outside. It’s a wryly observed ending to a satisfying and emotionally exhausting tour de force of emotions and effects.

Whether it’s a product of the publicity machine or not, Poltergeist came with that horror film staple, the curse. They said it happened with The Omen, with The Exorcist and now this.

Rumours were rife that actual skeletons were used in the swimming pool scene and the murder of one of its stars prior to release didn’t help matters, nor did major players dying after parts 2 and 3. The remake seems to have bucked that particular trend – unless you count its death at the box office.

You know what though; I enjoyed the updating, such as the family having little choice in moving to the once aspirational suburbs. It didn’t add anything particularly new or did anything better but I certainly found it suitably creepy if not as visually memorable as the original.