Guest blogger Alex Norman hitched a ride on The Pork Chop Express to the Troxy in London on Halloween night, which was not dark and stormy and had no rain coming down in sheets thick as lead. He did however get to see the horror master, John Carpenter, play live. Like old Jack Burton he stood in the crowd and looked Carpenter square in the eye and says, “Give me your best shot, pal. I can take it.”

Check out his review…

When horror icon John Carpenter announced a European tour in support of his two Lost Themes albums, original music created with his son and godson, it was a dream come true to finally see one of my idols in person performing his iconic synth music.

Things got even better when it was announced he was doing a meet and greet before the event. I didn’t even question the £135 cost; it was more a case of where’s my credit card! Opportunities like this – meeting JC on Halloween in London – won’t come along too often.

With the Art Deco Troxy filling up, anticipation was building and it was bizarre surveying the mosh pit which consisted of Michael Myers, ghosts, They Live zombies, Gracie Law, Jack Burton, even the axe wielding crazy dude from In the Mouth of Madness (“do you read Sutter Cane?”). You get the picture – Carpenter even announced the winner of the best costume.

MacReady – “Why don’t we just wait here for a little while, see what happens?” The Thing

When the lights finally went out, the crowd roared in anticipation and out came the ‘bats’ – Carpenter was pointing out faces in the crowd, doing the sign of the horns, reverently chewing gum and even doing grandad shimmies. 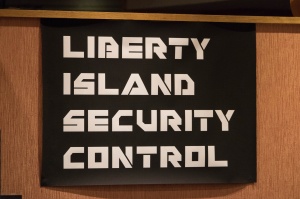 Then it began… Carpenter’s boney finger pressed down on the keys to signal the opening of the main theme to Escape From New York. Yes! Here we go.  There’s was a real lack of Snake Plissskens in attendance tonight which was a shame.

With the backing of his full band of men half his age, Carpenter’s music is injected with some rock power and his music explodes out of the amps. His iconic music still sounds as good as it ever has but it’s more ferocious, louder and, just, in your face.

As the exultant crowd scream their appreciation of the opener, Carpenter yells: “Hello London!”. Judging by the look on his face, his choice to go down this rock rabbit hole odyssey as he approaches his 69th birthday, you can’t help but think he is ticking off a dream he never really believed would happen. Next up is the driving and moody Assault on Precinct 13 theme.

A couple of tracks from Lost Themes follow, Vortex and Mystery, before the mood shifts… in between songs, Carpenter acts as a story teller, bordering on melodramatic, as he introduces The Fog.  It felt almost as if you could be in Antonio Bay as the stage is layered with thick fog and clips from the film are played on a giant projection at the back of the stage.  All of his film scores are accompanied by clips from the films and it really does enhance the performance.  After all, Carpenter is stationed behind a keyboard chewing gum and kicking ass musically, so it provides something else to enhance the performance. 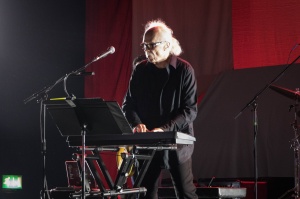 Next, as Carpenter and the band donned sunglasses, the crowd knew what was coming and the projection screen was filled with bold statements such as ‘obey’ and ‘money is your god’. Enter the main theme from They Live. As images of the late ‘Rowdy’ Roddy Piper and Keith David are beamed up on the screen, the crowd whoops and hollers.

Carpenter then introduces the next song in honor of one of the greatest film composer of all time, Ennio Morricone. The studio drafted Morricone in to score The Thing and reports of tension surfaced.  John even telling the great composer to play ‘less’ notes.  But Carpenter is a much more relaxed man these days and the past is blood under the bridge.  The Thing’s main theme literally shudders the rib cage as the thunderous bass pounds out of the giant speaker stacks.

Next up is Distant Dream from Lost Themes II – a driving, rocking track that sounds like a lost track from Big Trouble in Little China, and lo (pan) and behold, the next track is from that very movie – seeing Lo Pan emit his blue mouth beam on the big screen and various action packed clips from the film as the band are rocking out is very cool indeed.

Next up are a couple more tracks from Lost Themes – Wraith and Night. The former is a slow burner that sounds enriched and far more sonically powerful than the album cut. It’s at this point that Carpenter confesses tonight’s show has been uncharacteristically upbeat and that it was time to dour things down. This is where Night comes in – a dark slice of bass synth that broods along relentlessly.  This sets the mood and tone of the venue perfectly as Carpenter wishes everyone ‘Happy Halloween’ before keying the iconic opening notes to Halloween to the delight of everyone.

The main set is wrapped up with the hard rock main theme from In the Mouth of Madness which starts off sounding like Metallica’s Enter Sandman before it transforms into a balls-out rocker Carpenter-style, leaving those bad Metallica’s thoughts far behind.

Tonight’s encore kicks off with Darkness Begins from the Prince of Darkness score, followed by Virtual Survivor from Lost Themes II, one of the best tracks of the night that trudges along to a big finish.  Purgatory slows things down and provides the most emotive point before the second half of the track kicks in with marching rhythmic intensity.

Before the final song of the evening, our ringmaster and storyteller for the evening offers us some final words of caution: ‘travel home safely tonight, because Christine is out there somewhere’. Carpenter of course is talking about the sentient and violent Plymouth Fury that wins the heart of Keith Gordon before destroying everything that threatens their romance. There’s clearly a lot of love for this film and score.

With the final beat of the drum and as Carpenter’s last note fades out, he thanks the crowd, the band take a bow and leave to rapturous applause. Sure, it was a short gig clocking in at just 80 minutes but what a great 80 minutes they were. Whether this will ever happen again in London, who knows, but tonight, the Master of Horror channeled the youth and vitality so desired by Lo Pan and lived the rock star dream and added a whole new chapter and level of cool for his fans to cherish forever.

As Sheriff Leigh Brackett says in Halloween: “It’s Halloween, everyone’s entitled to one good scare.” Everyone who attended the Troxy certainly had one good evening. After all you can’t kill the boogie man!