Scream didn’t just reinvigorate the horror genre back in 1996 – can it really be over 20 years old – it took it to another level. From its shock opening this seminal shocker mixed knowing titters and terror to triumphant effect.

Horror director, Wes Craven, had previously scared us witless The Hills Have Eyes and A Nightmare on Elm Street and he had already dipped his toe in post-modern horror with Wes Craven’s New Nightmare, but Scream wouldn’t just rewrite the rule book, it would eat it and spit it all out, defining much of Hollywood’s horror output for the next decade.

Although everyone now knows how the opening sequence of that first film turns out, no one can deny its power and shock seeing it for the first time on the big screen, surely the modern day equivalent of Janet Leigh meeting her maker in Psycho some 36 years earlier.

Shock endings have long been a staple of horror but shock beginnings with such a well-known name and so early on in proceedings, which was a humdinger and justifiably secured its place high in the history of highs in the genre.

It was visceral and I vividly remember the murmurs of uncomfortableness and hushed ‘did that just happen?’ as the smash cut frames of Drew Barrymore could be seen hanging from her parents tree as I sat in that Odeon cinema in Luton. Jesus, they had just killed the little girl from E.T.!

This was the end of the innocence and the birth of a new horror icon, and if that wasn’t enough he went onto slay The Fonze as well. 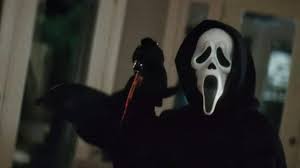 With that opening it set its stall out early that this is a horror with a whole new set of horror-savvy rules. Boasting assured direction and writing it was the perfect meeting of minds with the director of A Nightmare on Elm Street, The Hills Have Eyes and The Last House on the Left, meets the writer of Dawson’s Creek, Kevin Williamson.

The Scream films, all four were helmed by Craven, are essentially like the main character, lean, mean, pull no punches and list anyone and everyone as a possible victim (and suspect for that matter).Was it the dad, the boyfriend, the cop?

There were red herrings aplenty and everyone is a suspect, like a teen Agatha Christie movie, even going so far to use the double killer device from Murder on the Orient Express.

Even after 20 years it is still really fresh and sharp, the dialogue and scenes canter along. As well as expertly crafted in its own right Scream is a bloody love letter to the genre.

There are film references galore throughout, which makes it all the more fun to watch. It covers everything from Psycho to Carrie, a Wes Craven cameo in a Freddy sweater, Halloween on the TV, Friday the 13th, and a cameo by The Exorcist’s Linda Blair as a news reporter to name but a few.

Like those films, Scream has a memorable bogeyman in the form of Ghostface, who quickly established himself as part of the pantheon of iconic horror ghouls. 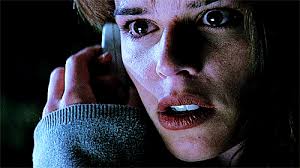 These kids aren’t stupid either and they know the rules of horror films, are self-aware. Knowing and clever it doesn’t insult the audience, instead it – like the characters themselves – it outfoxes them. Craven had stepped one foot in that arena with his previous film, Wes Craven’s New Nightmare, where Freddy Krueger stepped into the real world.

The only difference being that Scream takes place in our world also, a world where previous horror films such as Halloween and Friday the 13th exist. All of this is delivered with effective jumps throughout, that teeter between comedy elements and pure frights.

As Matthew Lillard’s character touted, “These days, you’ve got to have a sequel.” And Scream did, three, all directed by Craven. Scream now lives on rebooted for the new MTV generation, on where else, MTV.

Like Freddy, Norman and Hannibal before it Scream has joined TV. And it’s in good company with the likes of the continuing American Horror Story, The Walking Dead and the The Exorcist TV series.

I loved the original Scream trilogy, but was less impressed with the fourth chapter which returned after an 11 year break. It also turned out to be the last film of Wes Craven, who sadly passed away in 2015. 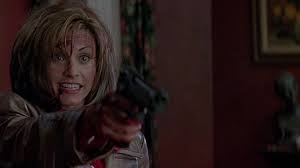 It’s doubtful we’ll see Scream back on the big screen anytime soon but as Craven showed with Freddy – returning to write Part 3 and direct Part 7 – you can’t keep a good horror franchise down and with horror resetting itself anew every few years and Scream being at its best, a celebration of horror films and trends, you can be sure of a back from the dead ending for this franchise on the big screen.